IMHX a Roaring Success for HC-Forklifts-UK

After a week spent in hotels, drinking and eating capacious amounts of coffee and biscuits, whilst stood on a stand for 8 hours per day, it’s safe to say IMHX 2019 took its toll on the HC-UK team. After a few days’ recovery, it provides the perfect time to reflect on the week’s activities and whether it was worth it?

The UK’s premier event for logistics professionals, which saw 450 companies exhibit and 16,000 attendees come through the doors, was one of the most impressive in recent times. The HC-Forklifts-UK team, which was led by Businesses Development Manager, Steve Young and Dealer Manager, Ben Afford spent most of their time speaking to new and existing forklift dealers, as well as big fleet users.

Steve said “This was the third time in a row HC-forklifts-UK have exhibited at IMHX, and It was nice to see so many people recognising the HC brand. This continuity has helped strengthen the brand in this market and contributed towards the “buzz” generated on the stand. There was a huge amount of interest in our products, particularly the Lithium-Ion 4-wheel electric which had its official UK launch at the show.”

There was a full range of HC products on the stand, including the new launch of the XC Series Lithium-ion 4-wheel Electric Forklift. Combining engineering excellence with the latest lithium-ion battery technology, the machine covers 2.0t – 3.5t range and ensures 50% more operating space than the traditional electric truck. The ‘green machine’ certainly got heads turning, bringing a lot of people onto the stand. 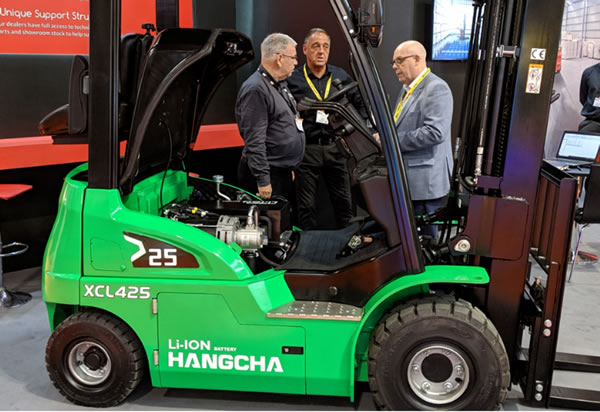 In addition, the 2.5 – 3.0 ton 4-wheel Drive Rough Terrain was on display. With a top speed of 26km/h, the robust forklift has three forward gears and one reverse for greater grade ability.

Built to withstand the toughest applications, the Rough Terrain surprised on-goers, which helped to signify the strength in depth of the HC product portfolio.

After sieving through a sizeable amount of business cards the team are now working hard to convert these leads. One of those companies included Elite Material Handling, who came to meet us on the stand on the Wednesday. Since then were pleased to announce that they have signed up to become an exclusive HC dealer for the Nottingham region. Overall, IMHX 2019 certainly lived up to expectations and was worth its weight in gold biscuits! 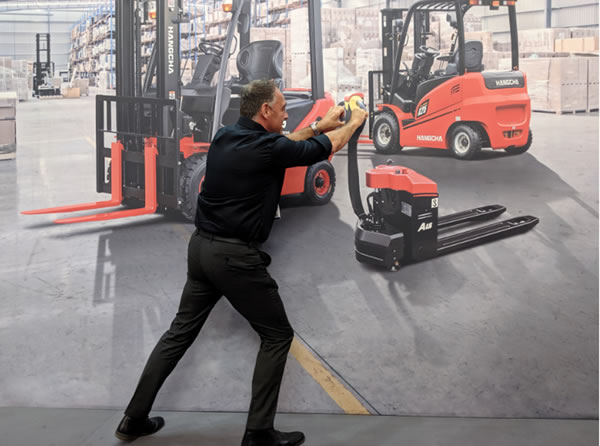 It’s safe to say 4 days on the stand took its toll on Steve!

We use cookies on our website to give you the most relevant experience by remembering your preferences and repeat visits. By clicking “Accept All”, you consent to the use of ALL the cookies. However, you may visit "Cookie Settings" to provide a controlled consent.
Cookie SettingsAccept All
Manage consent

This website uses cookies to improve your experience while you navigate through the website. Out of these, the cookies that are categorized as necessary are stored on your browser as they are essential for the working of basic functionalities of the website. We also use third-party cookies that help us analyze and understand how you use this website. These cookies will be stored in your browser only with your consent. You also have the option to opt-out of these cookies. But opting out of some of these cookies may affect your browsing experience.
Necessary Always Enabled
Necessary cookies are absolutely essential for the website to function properly. These cookies ensure basic functionalities and security features of the website, anonymously.
Functional
Functional cookies help to perform certain functionalities like sharing the content of the website on social media platforms, collect feedbacks, and other third-party features.
Performance
Performance cookies are used to understand and analyze the key performance indexes of the website which helps in delivering a better user experience for the visitors.
Analytics
Analytical cookies are used to understand how visitors interact with the website. These cookies help provide information on metrics the number of visitors, bounce rate, traffic source, etc.
Advertisement
Advertisement cookies are used to provide visitors with relevant ads and marketing campaigns. These cookies track visitors across websites and collect information to provide customized ads.
Others
Other uncategorized cookies are those that are being analyzed and have not been classified into a category as yet.
SAVE & ACCEPT